VOTE NOW to indicate whether you believe this story to be baloney or science (or alternatively do some research and apply the baloney detection toolkit first).

When NASA’s Juno spacecraft recently flew over the poles of Jupiter, researchers were astonished. 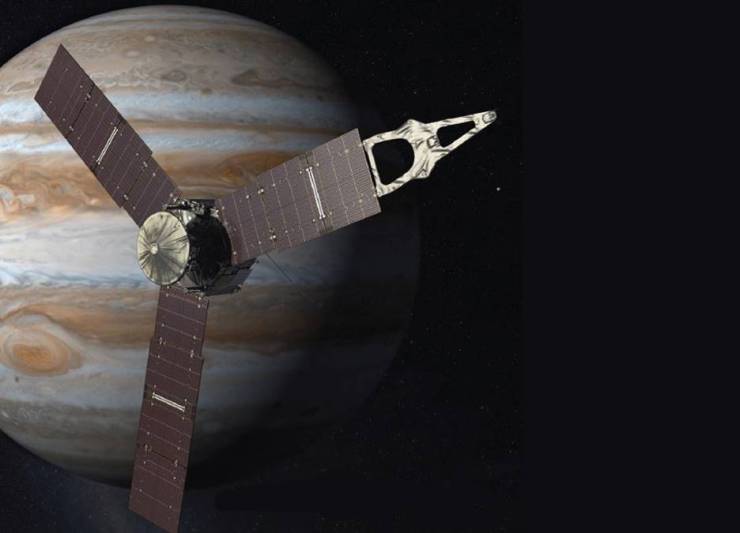 Deep inside Jupiter, researchers believe high temperatures and crushing pressures transform Jupiter’s copious supplies of gaseous molecular hydrogen into an exotic form of matter known as liquid metallic hydrogen. Think of it as a mashup of atomic nuclei in a sea of electrons freely moving about. “Liquid metallic hydrogen has low viscosity, like water, and it’s a good electrical and thermal conductor,” says Caltech’s David Stevenson, an expert in planet formation, evolution, and structure. “Like a mirror, it reflects light, so if you were immersed in it [here’s hoping you never are], you wouldn’t be able to see anything.“  Jupiter’s powerful magnetic field almost certainly springs from dynamo action in Jupiter’s interior, the process by which the motion of this electrically-conducting fluid is converted into magnetic energy.

Reinforcing the case for the existence of metallic hydrogen in January 2018 Harvard researchers claim they have created it in the lab for the first time, by squeezing a sample of the element to pressures beyond what exists at the centre of the Earth. The creation of a substance first predicted more than 80 years ago could one day lead to superfast computers or souped-up rocket fuel. The researchers achieved the feat using diamonds to squeeze solid hydrogen at low temperatures, until the atoms were so packed that they started to share electrons. The shared cloud of electrons indicated a transition into a metallic state, making the hydrogen shiny and electrically conductive. “If this experiment is reproducible, it solves experimentally one of the major outstanding problems in all of physics,” says Jeffrey McMahon at Washington State University in Pullman.

If you want to find out more about this story or the baloney detection toolkit then please come to Carl Sagan´s guide to Fake News.