Updated on Jan 31.  After I tweeted a link to this article on 30 Jan, Martin Lewis replied via twitter.  I have updated this article to include copies of his tweets in the relevant section.

On Jan 23 Martin Lewis and Facebook´s Regional Director of Northern Europe, Steve Hatch, held a joint press conference where they announced that the defamation case that Martin Lewis had brought against Facebook in 2018 had been settled.  Lewis has stressed 2 key actions promised by Facebook in this agreement:  a £3,000,000 donation promised by Facebook to setup a Citizens Advice Scam action project and a “scam ad” button available to UK users so they can easily report Facebook adverts believed to be scams.

Last year, I wrote about this case here focussing on the decision-making process and looking at the various outcomes that could arise as a result of this action.  At the time I described a settlement agreement as the option most likely preferred by Facebook, but unlikely to be preferred by Mr Lewis.  So why has he settled?  Taking him at his word, and there seems little reason to doubt it, Mr Lewis believes he has prompted Facebook into action they would not otherwise have taken and extracted concessions disproportionately large considering the nature of his defamation claim.  He is proud of the settlement and says the actions promised by Facebook will help protect British consumers from scammers in the future.

For me, though, there are some questions open which I haven´t been able to answer yet through researching the case:

There may be very good answers to all of these questions, and I do believe that the actions listed in the settlement represent a solid step forward in the battle against  misinformation that is routinely propagated across various media platforms, especially those coming under the banner of social media. 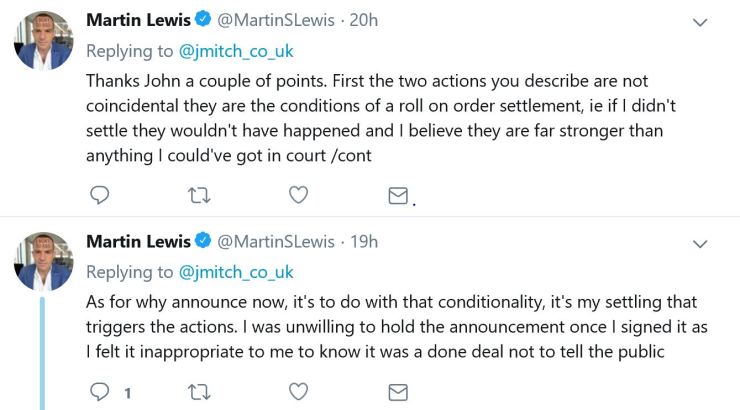 I would urge Martin Lewis not to under-estimate the strength of his position.  I often speak to people who tell me that they can feel overwhelmed by the tsunami of misinformation washing over them.  To reverse this tide we need the big social media providers to take more responsibility for the content presented on their platforms.  If that means more regulation then so be it.  Martin Lewis has built his reputation by providing solid advice based on meticulous research.  He speaks truthfully, and he has much to gain by urging those with an editorial responsibility to ensure they do the same.  I, for one, would be right beside him in that fight.