I´ve written quite a few times before on fake news and fact checking on this blog, including this guide here from mid-2018.  However, the “lockdown” situation we are currently in has prompted me to revisit the issue.  Firstly, I was confidently told by a friend of friend of a friend that the virus was a biological weapon devised by the Chinese military and then shown footage of Chinese activists tearing down 5G mobile phone masts because they had uncovered a world-wide conspiracy to cover up that 5G mobile phone masts caused the virus.  These stories are all absolute, to use a technical term, hooey, spread far and wide on various social media platforms.  This is nothing unusual – this type of “snake oil” has been peddled for centuries, and in these times where some people are desperate for “clicks” for whatever reason, making up stories and then broadcasting them far and wide, we shouldn´t be surprised at this phenomenon.  Take, for example, this tweet by @AdrianoMazzola… 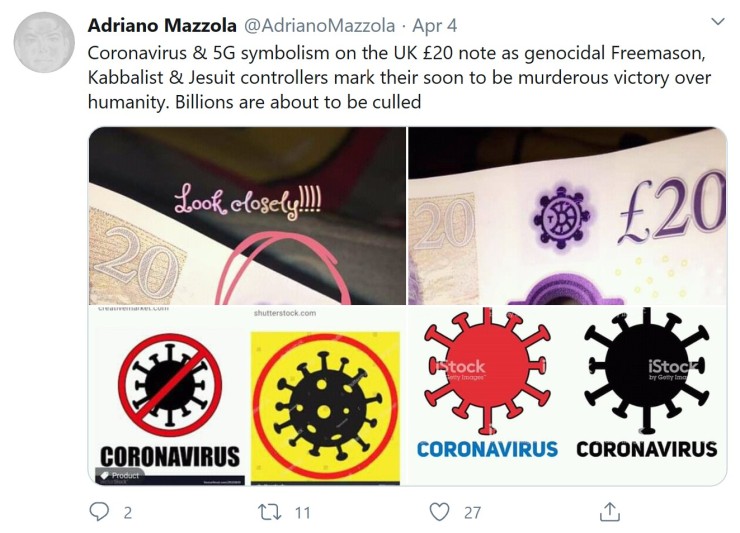 This tweeter manages to link some well established conspiracy theories (the world is run by secret organizations like the Freemasons) with the 5G Mast nonsense and then tops it off with the astounding claim that the Bank of England has decided to tell us this story, hiding it in plain sight, by printing it on the new £20 note.  There is so much wrong with all of this that I hardly know where to begin.  Firstly, there’s confusing correlation with causation – just because 5G and Corona Virus are happening at the same time doesn’t mean one is causing the other.  In fact, 5G started rolling out in Germany and South Korea last year – no corona virus then.  We could also quote the lack of sources, no references and no way to check on the origin.  There is also “ignorance as proof” – i.e. you cannot prove to me that secret organizations aren’t running the world, or that the Bank of England aren’t telling us about the 5G virus, so they must be.   The original video, by the way, shows protestors in Hong Kong in August 2019 (pre-virus) knocking over a lamp post containing surveillance cameras – see this link on snopes.com

Doubtless, @AdrianoMazzola believes snopes.com are also part of this worldwide conspiracy, or maybe he just enjoys spreading misinformation.  The tweeter has over 3000 followers and you can see from the screenshot this tweet got retweeted 11 times.  That’s more infectious than the virus itself.

There is too much of this “fake news” to debunk it all – so I spend a fair chunk of time promoting methods and techniques to allow people to fact-check stuff themselves.  As well as writing articles and speaking on this topic I also have an activity: “Carl Sagan’s guide to Fake News” which I have run at the Science Museum, the Big Bang Fair and various educational events.  The activity consists of a fake newsroom where participants can investigate a set of stories using Carl Sagan’s Baloney detection toolkit .   This activity is also available online at faxenews.jmitch.co.uk.  When the corona virus outbreak started I decided to refresh the website and started to look for corona virus stories to incorporate into the activity to increase the topicality.  So I researched, found the 5G virus story and prepared the materials ready to incorporate into the online activity.  I then had a break and went back to proof-read the materials.  When I read through the story again I thought: “I can’t put this out.”.  Even though the story is a great case study for the activity illustrating many of the “Don’ts” in the toolkit and none of “Dos” it seemed too “hot”.  I felt that I couldn’t take the risk of the materials being taken out of context and being shared even further.  I don’t want to pour any more oil on the bin-fire that @AdrianoMazzola and company are stoking.  So, instead, I wrote this article.  So please, please, please I urge you to fact-check your stories.  In times of crisis, like these, it is even more important that we deal in the truth.   Evolving scientific research based on facts is our way out of this horrible situation – making stuff up and spreading it around won’t help.

2 thoughts on “Fake news and the Corona virus…”